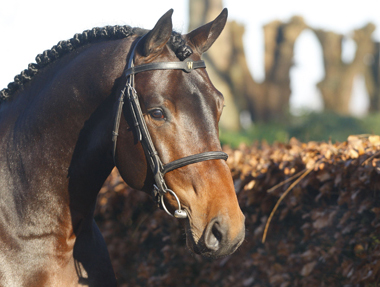 Innovation is the first KWPN approved stallion of the successful showjumping stallion Van Gogh. Van Gogh nearly does not need any introduction. This son of the top horse producer Numero Uno won among others the GCT GP of Valkenswaard, the CSI5* GP of Los Angeles Masters and the CSI5* GP Hong Kong Masters resulting in more than a Million in prize money winnings.

On the dam side we find Athendra, a daughter to the well-known German horse producer Contendro I, who has delivered more than 50! 1.60m GP horses and is bred out of one of the most renowned dam lines ever. Athendra is a so called “Staats Premië Stute” and belonged to the best mares of her year and additionally got rewarded with the “Oldenburger Elite End-Ring predicate”. It was not a surprise that also the KWPN praised this mare in their report emphasizing on her great exterior and excellent movements. This dam line goes back to grandmother Athene (s.Last Liberty), also an “Elite and Staats Premië Stute”, and great grandmother Weidthene (s.Waidgraf) who carries some essential Thoroughbred stallions on her Father’s side. This dam line produced several approved stallions and successful Sporthorses.

The beautifully modelled stallion Innovation got approved in the autumn of 2016 and was awarded with high scores during his KWPN ability test. On all sections he scored 8 points or higher. His test report emphasizes on his strong, correct and appealing exterior combined with his high quality fundament. He is motivated and willing to work and has a good balance and light-footed canter that covers above average ground. Innovation’s showjumping skills show a good take-off and good reflexes. Furthermore the report states that he has more than a lot of ability and gives his rider a very good feeling.